Being faced with a decision to decide between money and safety, is a tough decision. Most people say that safety is way more important than making or saving money, but when the decision is on you and dealing with millions of dollars, what would you decide? Is it really that easy of a decision? On June 29, 1995, the largest peacetime disaster in South Korean history occurred in Seoul; this disaster resulted in 502 deaths and 937 injuries and was the result of a decision of money over safety.

Construction for a four floor residential apartment building began in 1987. The land being built on was previously a landfill. During construction, the future chairman of the building Lee Joon, changed the design to a department store. Part of this design change included cutting away some of the support columns to install escalators. The original contractors refused to make the changes; Lee Joon fired them and hired his own company to build the store. 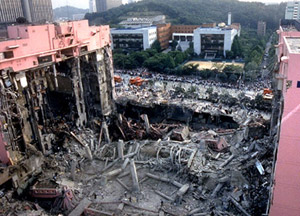 The building was completed in 1989 and opened on July 7, 1990. During the 5 year existence of the building, it is estimated to have around 40,000 people a day. After a while a 5th floor was added to the structure. Originally, the design was to have it be a skating rink so it complied with zoning regulations that prevented the whole building to be a department store. Lee Joon changed the plans for the fifth floor to house eight restaurants. Again, the construction company advised Joon that the structure would not support the additional structure, and again Joon fired them and brought in a new company.

The fifth floor was made of concrete, and was made thicker to hold hot water pipes for heating since tradition is for people to sit on the floor while dining. The air conditioner unit was installed on the roof, which added four times the design load. Two years before the collapse, the air conditioner units were moved across the roof by dragging them. This caused the roof to start cracking, and the column on the 5th floor which sat under the units also showed signs of initial cracking.

In April 1995, cracks started to show in the ceiling and Joon's response was to move the stores from the fourth floor to the basement. On June 29, the cracks increased dramatically. The response this time was for the managers to close the stores on the top floor and shut the air conditioner off. Executives refused to shut the building down or issue an evacuation because the number of customers was unusually high that day and they didn't want to lose the revenue, but the executives left the building as a precaution.

Eight hours before the collapse, civil engineers inspected the building and revealed there was a risk of collapse, yet the building was still not shut down. Five hours before, loud bangs were heard from the top floors and vibrations from the air conditioner caused the cracks in the floor to grow to 10 cm wide. At 5:00 pm Korea Standard Time, the fifth floor of the building started to sink. With all this occuring, the owner of the store still refused to close or carry out orders for repair. At 5:50 pm, cracking sounds were apparent and store workers sounded the alarms and issued an evacuation. Seven minutes later, the roof gave way, the AC unit came crashing through the floor, and the main columns of the building collapsed.

The collapse took 20 seconds, and after that short amount of time 1,500 people were trapped and 502 were dead. The property damage cost was $216 million (US dollars).  The investigation showed that poorly laid foundation, incorrect application of technique, and an additional fifth floor were the main causes of the collapse. A concrete mix of cement and sea water, and reinforced concrete was used for the ceiling and walls; the number of steel reinforcing bars embedded in the concrete were half as many as needed. The columns and a number of other things were not up to par with the number or size of what was necessary. Additional causes included building on unstable ground, dragging the units across the roof destabilizing the surface, and the vibrations from the air conditioner unit.

After the event, multiple trials took place to give consequences for those who were part of the collapse. Lee Joon was charged with criminal negligence and ten and a half years in prison. In April of 1996, his sentence was reduced to seven years; a few days after being released, Lee Joon pasted away due to poor health. The store's president, Lee Joon's son, was charged and spent seven years in prison for accidental homicide and corruption. Twelve city officials that were found guilty of taking bribes of as much as $17,000 to conceal the illegal changes in the design of the store and the poor construction, were also jailed for seven years, with the store executives and the company that completed the building process. The settlement involved a total of 3,293 cases.

The damage done to the building and the people of Seoul, South Korea could have been prevented at every measurement. A four floor department store could still be standing today and racking in the won. A man's want for money overpowered his ethical morals. The contractors and construction workers that were originally hired for the jobs had enough sense to put aside the money aspect to step up and say, "This is unsafe." Sadly, their advise was thrown aside all for money. Lee Joon was focused only on how much he could save for this development, and what could maximize his profits. During the build, if safety had been the number one aspect, like it always should be, then hundreds of lives could have been saved.
Posted by J. Edwards at 5:21 PM

J. Edwards
I am currently a junior in NDSU's Civil Engineering program.